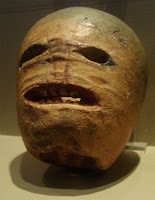 This poem is for Halloween. In Old Germanic lore, this time of year was when the Wild Hunt took place. There is a great deal of literature on the lore of the Wild Hunt. One explanation is at the Orkneyjar website

Now it's your turn - to leave a comment. Here are three questions to help you get started.

1. What image or images did you like the most?

2. What images or idea in the poem would you like to know more about?

3. What do you like or dislike about this metre, runhent?
Posted by Fridrikr inn gamli Tomasson at 5:30 PM