So, here it is, late June, and I haven't posted in like forever. It has been busy and I have been very distracted by life. Still, things have been in my mind and one of them escaped that dark black pit of despair recently.

As most of you know by know, I'm a resident of the Barony of Thescorre, in the Kingdom of Æthelmearc. The barony's heraldry is "Argent, on a pall azure between three ravens volant sable, a laurel wreath Or." 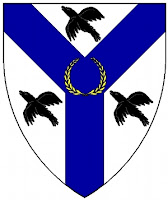 In the lore of the barony, the ravens have been named: Hugin, Munin, and Bob (!) - the third raven who does what the other two think of and recall. As the newly appointed Baronial skald, I see it as my duty to instruct the folk of the ravens and how they sing. Thus, the latest poem.


NOTE: As you know, if you read my blog often, a kenning is a specialized form of metaphor. Ordinarily, I would refer to Thescorre as hrafna heim "Ravens' Home", but in this case, I've changed the base noun to dý "bog" after the old description on Thescorre as the Barony of the Bog.

In other news, this past weekend, Their Majesties of Æthelmearc, Andreas and Kallista, gave me a writ for elevation to the Order of the Laurel. This document orders me to appear before Their Majesties to be inducted into the order, which is the highest order our "medieval recreation" group offers in the Arts and Sciences. It is a great honor and I thank Their Majesties for Their generosity.

So, please comment on the poem. I'd appreciate any comments you have.
Posted by Fridrikr inn gamli Tomasson at 12:59 PM