Hej!
A brief interlude from the  Friðrek drápa inn Frisi.  Every year (or almost every year) since 1976, I have attended the Pennsic Wars.  From a weekend camping event with three battles, this has evolved into a two-week vacation camping event filled with fighting, fencing, archery, thrown-weapons, shopping, classes (this year I taught four classes, seven sessions - all of them on things Icelandic), bardic circles, and good times with good friends.
While sitting in camp over the course of two mornings, I wrote two and a half vísufjórðungar (couplets)  that are worthy of being kept and used in a later poem.  Four hours = five lines of poetry.
Here they are:
Verse One
haslaði á holm-gang
holinn-menn fyrir gull-hringr
Challenged (he) to holm-gang
bragging-men for gold-ring-the
Verse Two
röskar Morghun rauð-harr
ræti hamingja leitinn
brave Morguhn red-haired
rode (his) fortune seeking
And a partial Verse Three
bat tvía skjoldar hvita ok rauða
bore (he) twin shields white and red [white shield = peace; red shield = war]
Now, for the more complicated part, how I took four hours to write a total of five lines of poetry.  These are pretty well shown on the notebook pages attached.  It takes five steps:
1. Brain-storm ideas for the rough meanings in English
2. Hunt down key words in the Cleasby-Vigfusson I have on my lap-top
3. Work out the grammar in the New Introduction to Old Norse
4. Place the key words into partial lines and build the lines around them
5. Translate the lines back out in English
And that's how I write the verses you read in my blog.
Here are the notebook pages for these five lines of verse. 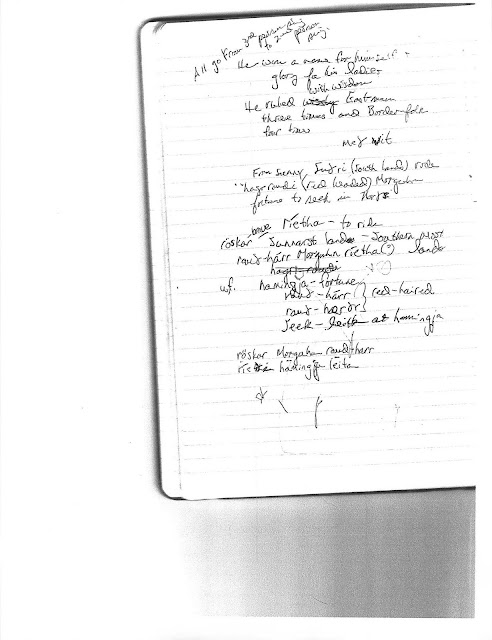 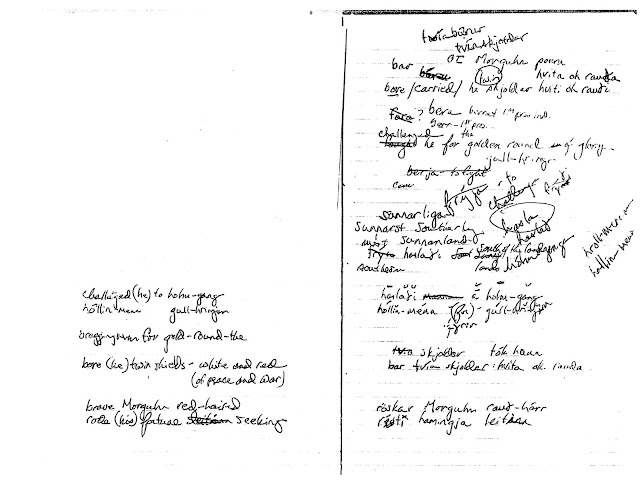 Hope you enjoyed this trip into the Skald's mind.


Posted by Fridrikr inn gamli Tomasson at 10:57 AM