I have been fascinated by ravens since I was a boy. I watched crows, and I read of their cousins, the ravens. Tales of ravens, such as Hugin and Munin, are part of what drew me to Norse mythology and, eventually, to the sagas and poetry. The Norse had a fascination with the ravens and their eerie behavior when scavenging. The kennings list at the Skaldic Poetry of the Scandinavian Middle Ages website shows no fewer than 125 different kennings for ravens.

A few years ago, I read Mind of the Raven: Investigations and Adventures with Wolf-Birds, by Bernd Heinrich, a fascinating book which discusses the intelligence of the birds. Recently, I came across a web posting on the same subject. In the article, the authors discuss the sophisticated communications system of ravens:


[R]avens use their beaks similar to hands to show and offer objects such as moss, stones and twigs. These distinct gestures were predominantly aimed at partners of the opposite sex and resulted in frequent orientation of recipients to the object and the signallers. Subsequently, the ravens interacted with each other, for example, by example billing or joint manipulation of the object. Ravens in particular can be characterized by complex intra-pair communication, relatively long-time periods to form bonds and a relatively high degree of cooperation between partners.

It is this highly developed communications strategy that helped inspire this verse describing a pair of ravens viewing a battlefield. I hope you will enjoy it! 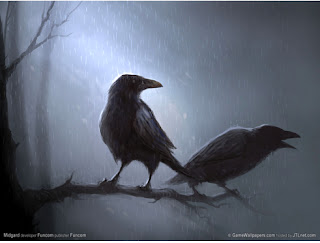 One note: In the third stanza, I did a tricky - I essentially split the two half-stanzas into four lines and mixed them together. So, when you look at the Old Icelandic and Line-by-Line versions, the parenthetical lines go together, as they do in the prose order translation. This is a rarely used technique, but an interesting one to use once in a while. I'm sorry if this causes confusion.

Your comments mean a great deal to me. They help guide me. Please, comment below or to my e-mail.